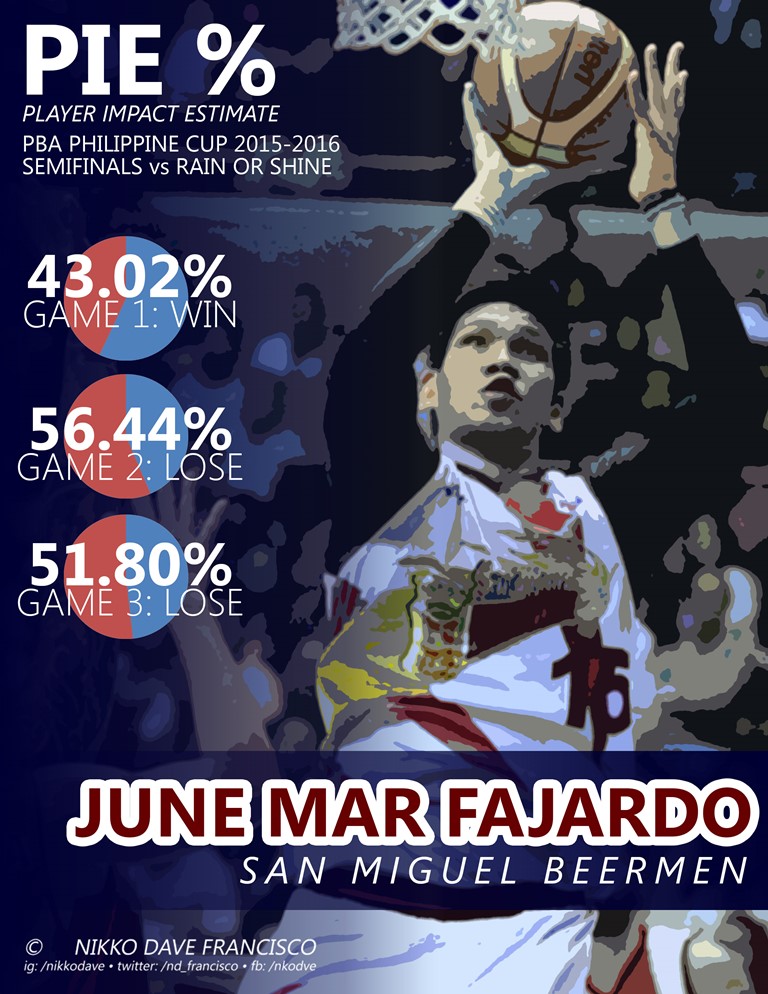 Photo used in the poster is owned by PBA Media Bureau via InterAksyon | http://www.interaksyon.com/interaktv/smbs-june-mar-fajardo-has-no-problem-playing-extended-minutes-in-semis/smb-fajardo-ros

The Kraken may be putting up monster numbers in PBA Philippine Cup semifinals, yet San Miguel Beermen is trailing in the series against Rain or Shine, 2-1.

June Mar Fajardo is dominating every ROS big men. He averages 38 points, 18 rebounds, 3 blocks, but 4.3 turnovers per game. The player from Cebu is the focal point of their offense, while he serves as the defensive anchor on the other end. The bad side of it, the offense becomes stagnant when June Mar is in the post. His teammates tend to watch the play, instead of moving without the ball.

Using PIE, or player impact estimate, I will show how much Fajardo contributes to the team vs his teammates. PIE is an advanced statistics introduced by NBA which measures a player’s overall statistical contribution against the total statistics in games they play in.

So back to Fajardo.

In game two and three losses, his PIE went to the sky, as he contributed more than half in both games, 56.44% and 51.80% respectively.

Playing close to 40 minutes in consecutive games may be starting to take a toll. If ever San Miguel Beermen survives this series, how much fuel will be remaining in Fajardo’s tank for the Finals?

Game 4: June Mar Fajardo got plenty of support from his teammates, as he recorded 39.13% PIE. Fajardo was cruising all-game long with 33 points, 15 rebounds, 3 assists, 6 blocks. He still played close to 40 minutes, yet this must be the easiest game for him. He did not need to force his shots because SMB shooters got their rythm in their 105-92 win against Rain or Shine Elastopainters.